If you are using a traditional horisontally oriented dipole today then perhaps you could benefit from this clever gadget for much better DX-ing: The Lazy-H.

As the DX needs a low take-off angle the traditional dipole should not be our first choice as it almost always radiates a significant part of its energy straight up into zenith. And that is definately not where the DX is! The cause for this upwards lobe is the horisontal polarisation and the fact that much of the antennas’ energy is also directed down to ground where it will bounce up and later superimpose itself with the rest of the antenna’s radiated energy. The situation can be ameliorated somewhat by lifting the dipole up more than half a wavelength, preferably much higher, but this is impractical in many cases. And in any case only serves to get low lobes and not to eliminate the upwards lobe.

An trick is to add a second dipole straight below the present radiator and let this second dipole absorb any downwards radiation from the upper dipole. And this is the principle of the well-known DX-antenna the Lazy-H. Not only vanishes the upwards lobe but the radiation pattern becomes also rather clean in two fairly narrow lobes. It is however mainly the loss of the upwards lobe we are looking for.

What we want to do is to adjust the spacing between the two radiators so the lower is completely out of phase with the upper one, taking into consideration the air travel distance for the radiation. In short, what we want is a vertical spacing of exactly 0.5 wavelength and then feed the lower dipole exactly in phase with the upper one. This way their out of phase relationship is preserved and total cancellation of the upwards lobe is achieved!

One quite practical way of solving this is to manufacture two identical dipoles, placing them 0.5 wavelengths apart and feeding them in parallell with equal lengths of coax. Using two feeders like this is perhaps a bit cumbersome but perfectly possible for good results.

Here we shall however rid us of the two lenghts of coax and use a quarter wave section of ladder-line’s impedance transforming property. This leads also to possibly a simpler single coax feed.

A quarter wave piece of feeder or open line exhibits an interesting impedance transforming property: A low impedance of a few tens of ohms at one end is transformed into a high impedance in the range of thousands of ohms or so in the other end of the wire. There is (of course) a theory behind all this whereby the relationship between the involved impedances and the characteristic impedance of the feeder is revealed. As we really do not know either of these exactly a “general appraisal” of the quarter wave section (or Q-section) is enough for us to continue.

Figure 2. Geometry and feed arrangement through two Q-sections. Here the feed wire is mainly ladder line but that is not necessarily so. See text.

Doing this with an ordinary half wave dipole with a low feed impedance in its middle, that low impedance will be transformed into a high impedance which, after parallelling with dipole numer two, results in half of a “high impedance”. Still, most likely a high impedance, that can be difficult to feed with anything but ladder line. 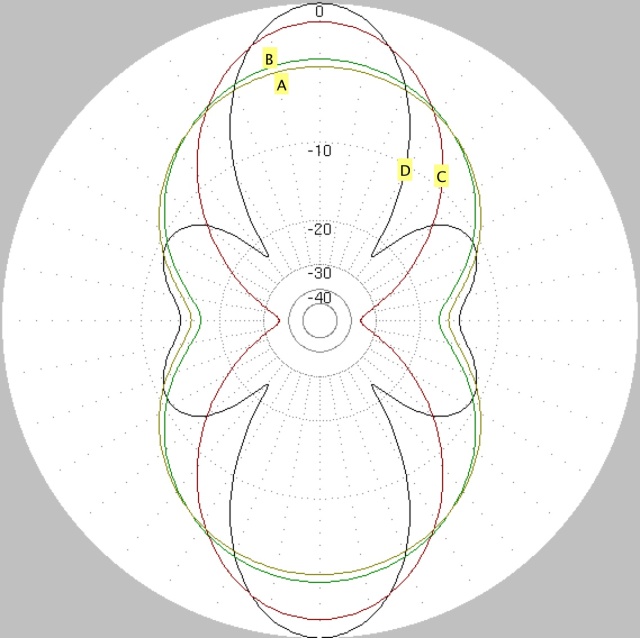 Figure 3. Lazy-H with four different (full) lengths of the two dipoles. A-C are 0.25, 0.5 and 1 wavelength respectively. D is 2 times 5/8 wavelength resulting in slightly higher gain at a cost of nasty sidelobes. Note the little difference in radiation between A and B. However A is very low impedance and makes a hard match. B is suitable for direct coax attachment while C and D are high impedance dipoles where Q-sections are suitable for matching. The take-off angle is the same in all cases – this is governed only by the height above ground level as usual.

Using two full-wave dipoles and two Q-sections the feed impedance will be quite realistic. Something that we shall have no or little trouble in matching – if matching is needed at all! As the impedance now is low then this antenna can be fed directly with either 50 or 75 ohm coax line. 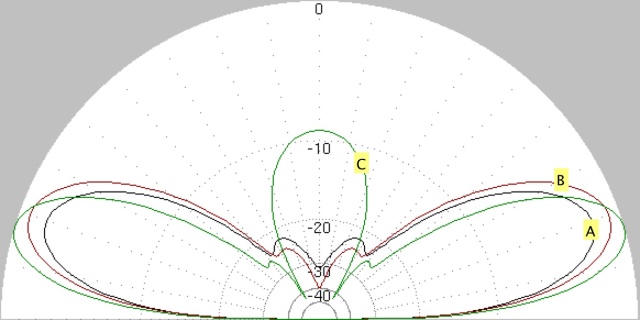 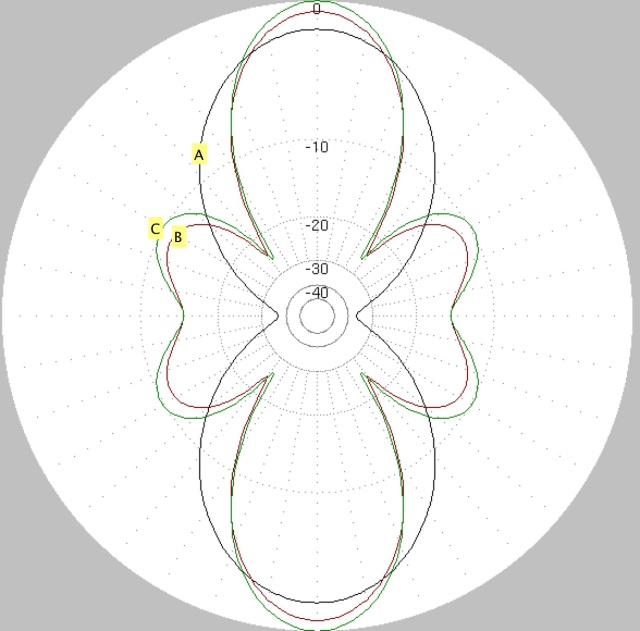 Figure 4. Somewhat more gain is the result if we extend the original (A) full-wave dipoles to 2 times 5/8 wavelengths, B. In the upper picture one sees that zenith radiation is nil as long as the dipoles are separated by 0.5 wavelengths. Increasing this distance to 5/8 wavelengths produces a significant unwanted upwards lobe in C!

One is of course tempted to use this antenna on other frequencies than the dipoles were originally manufactured for. This is perfectly possible but one should not expect cancellation of the upper lobe as that cancellation is frequency dependent. Neither should one expect the impedance to be the same on other frequencies as the Q-sections will not be quarter-wave lengths at other frequencies. The upshot of this is that the antenna will radiate on other bands but with increasing loss in the feeder due to the high SWR which can be expected on other than the antenna’s fundamental frequency.

Losses due to high SWR has been handled before and one way is to put a tuner at the feed point of the lazy-h. I am a friend of ladder line for feeders and since their loss is very low even at high SWR:s then ladder line is what I used in my antenna. From the centre of the lazy-h a 40 metre run of 300 ohm balanced ladder line was used. This line requires the use of a balanced tuner but as I already have an old K.W. E-Z-Match this is not a problem.

According to the theories mentioned above a lazy-h for 14 MHz fed with ladder line was constructed in the summer of 2007. The upper dipole was some 18 metres above ground level, the lower consequently only 8 metres up. Q-sections were made out of 450 ohm ladder line. Its orientation was east/west thereby covering a line from South America, England, my QTH, Finland, Russia, Malaysia and Australia.

It is clear that the upwards lobe has vanished. It is a very quiet antenna regarding local noise. The normally very strong european stations are very weak, if heard at all. Hams in England go in with a booming signal. As do many Russian stations. Given the right time of day then also several South American stations are also heard, something which is not common at my QTH at this low sunspot number. I have not yet heard any Australian stations but I explain this with that I cannot listen at all times around the clock.

Given that, I have still not been able to run all that many stations I have heard. There is something in the ionosphere as this phenomenon is known by other DX-ers on this high latitude (N58). Apparently South Americans run stations located in the southern Europe with relative ease, but the more north you get the harder it is for the signals to get through:(

So how about a conclusion? Well, even though the antenna has its gain where it should perhaps is also should be mounted higher than my trees allow. At 18 metres they are about as tall as it is possible for me to get a rope up. Higher than that is not practical for me. And while a narrow lobe is fine for point-to-point communication perhaps it is really too narrow for general DX-ing? I have a gnawing feeling that this antenna is too much pain than gain. I have done Malaysia on it (which is quite far away) but it turned up not to be the silver bullet I had expected from simulations. It is too early to reject it though. And it is still up event though several rough autumn winds have tried to pull it apart, which is a good thing…

Comparing with a Bobtail

How much differs the lazy-h from another well known DX-antenna, the Bobtail? Simulations show some marked differences to the advantage of the lazy-h. Most of this is gain due to its horisontal polarisation. Otherwise their lobes are similar. It would have been most interesting to compare these two antennas side by side! 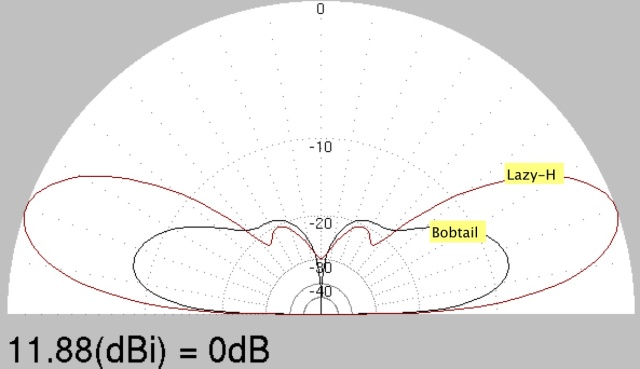 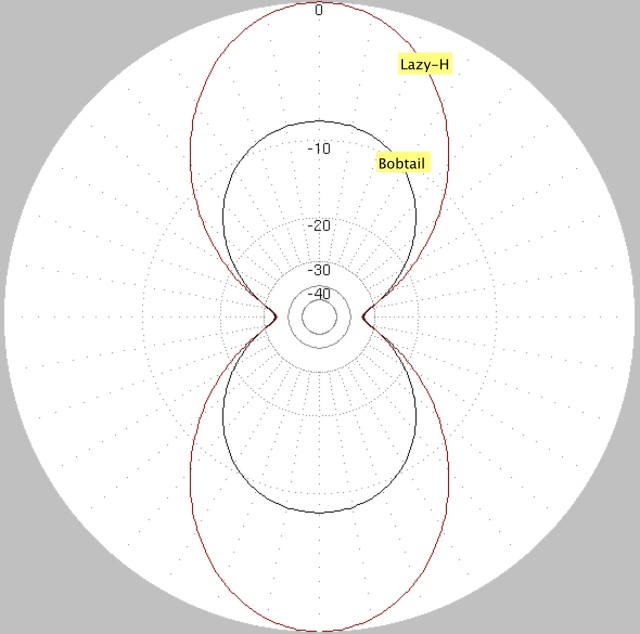 Figure 5. An intresting comparision between a (simulated) bobtail and lazy-h. The horisontally polarised lazy-h wins on gain. The take-off angles are virtually identical. The bobtail is simulated over average ground – over salt water the bobtail has even lower take-off angle and appreciably more gain too.