When it comes to rigs I have found “home” in the way of a Ten-Tec Jupiter 538. It is a fantastic rig in many aspects but what I find most pleasing compared to every other rig I have tried over the years is the Audio! (Yes, capital A). The receiver has very little noise, compared to other receivers practically none. Reading the schematics one can attribute this to a very low-noise 1st RF stage (keeping noise figure down with three parallelled transistors in that stage) and HiFi audio components elsewhere (TL082 op amps and AC97-type AD-converter — if it is good enough for audio cards in computers it is good enough for us!). After the AD-conversion, filtering etc is done in the CPU, an Analog Devices DSP running at a mere 16.67 MHz.

Unfortunately the source code is not publicly available (perhaps just as well as coding wrong could wreck the entire rig?). While there has been a few firmware upgrades there are still some more or less irritating bugs left in the code. One of which is that the audio level cannot be cranked down to complete silence. There is always some residual volume coming out through the speaker. For my external 15″ speaker element this audio level it too high.

Reading the schematics one can find that the volume is not controlled by at potentiometer but with a resolver (the front panel’s MULTI-knob) giving digital “ticks” to the CPU. The CPU assemble these ticks and serially feeds the number to a DAC (D/A-converter, U7 TLC5620C on 81886 CPU schematic) which then gives a DC level out (“VOLUME_V”) that corresponds to the wanted volume. 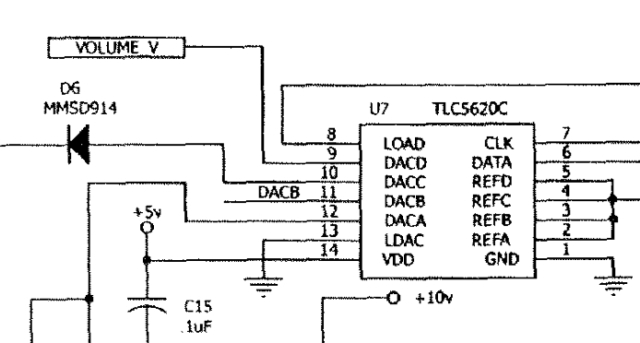 Excerpt from the manual. The CPU feed digital values serially through pin 6 & 7 (DATA & CLK). (A cleaner mod than the one presented here would be to change the DACD reference voltage but as this is a multilayered PCB it is not easy if possible at all. Altering the REF-level for the entire chip would be possible but then the AGC-level from DACC would have to be trimmed anew, as the power control from DACA. How does one do that?) 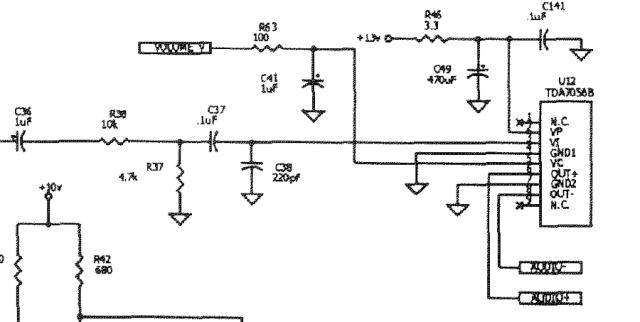 The AF amp according to schematics. Pin 5 “VC” controls the volume. In later models R37 4k7 is entirely removed for better audio. Read more below about that.

The datasheet of the TDA7056B is interesting in that it points out that a control voltage of <0.4V will MUTE the entire chip. Apparently the software never really lets the control voltage reach this low level. If one had access to the software it would be an easy mod to change this, but as it is… can not be done:/

The less elegant way of solving this is to put a resistive divider in front of the TDA7056B (parallell to C41 above). This is what I did and it works swell!

Measurements before the mod showed a lowest VOLUME_V of 0.48V, i.e. well above the MUTE voltage. No wonder it never goes quiet! As the DA-output runs through a RC-filter (R63 100 ohms, C41 1u) the TDA7056B sees a Thevenin equivalent with an inner resistance of 100 ohms (the DAC sources through a FET to +ve rail). A resistive divider turning the 0.48V down to 0.4V would do the trick. In practice I installed a potentiometer to let me trim this level, and it went silent at 0.387V. As the pot was 5k (measured 4.97k) and the unused part of the resistance was measured to 4.48k it appears that the theory holds (4.97-4.48=.49k) and a 470 ohm resistor would have been just as efficient. Today, with this knowledge, I would have use that resistor instead of the potentiometer.

Some pictures of the process. First the bottom side of the rig has to be opened. Turn it upside down, remove the four larger head screws on the side of the chassis, then the smaller torx screws from the rear, and remove the half cover. The CPU board is then visible (or if you have the ATU installed you also have to remove the aluminum plate that covers the CPU board. The antenna cables inserted into jacks labelled Input and Output can be pulled out if you need to.) 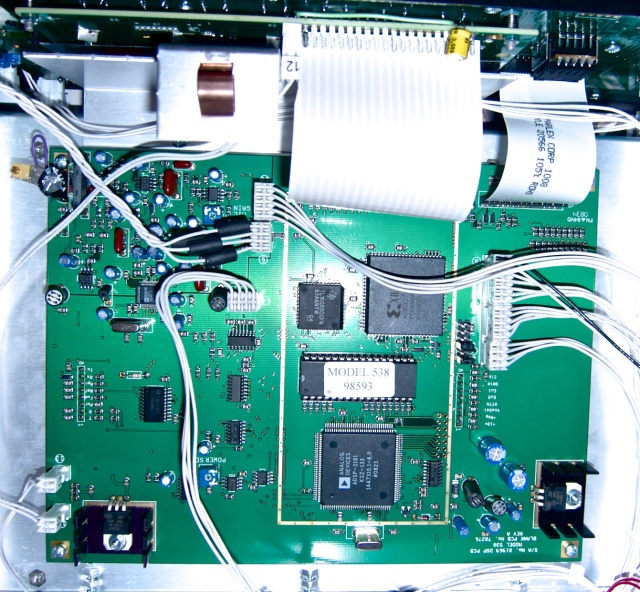 The CPU board after the modification as seen with the bottom cover removed. The CPU board contains the heart of the rig, the ADSP2181 DSP (the large square at the bottom of the picture). Just below it is the processor XTAL of 16.67 MHz and above it the 29F040 EEPROM with the firmware. Above and to the left is the serial chip, a 16550 derivative, and to the right an 84-pin Xilinx XC9572 PLD. The PLD serves a multitude of functions mostly as a general I/O-expander.

To access the soldering points for the mod we have to reach the underside of the board so we have to remove it. Unscrew the corner screws, “dis-jack” J12 lowest left white cable, the center cable with the ferrites and the two flat cables running to the panel and the LCD. Now the board can be lifted straight up a bit until the underside connectors disconnect from the RF board on the other side of the rig. Then tilt the board as in the picture below:

Board lifted. Note the rectangular holes in the bottom aluminium. This is where the two headers from the PCB connect to the RF board on the other side.

The upper left part is the centre of activity for now. Luckily for us there are no machine soldered surface mount devices here but plain old hole mounted components. Our interest is the leftmost corner:

The copper is ground 0V and firmly so, as it is secured with dents to the chassis when screwed in place. The line of solder pads is the TDA7056B mounted from the other side. The square one is device pin number 1, directly to the left of it pin number 2 and so on. We can clearly see that pin 4 and 7 are connected to 0V. In the schematics these grounds are triangles indicating analog ground so it is OK for us to use them!

The VOLUME_V enters pin 5 so if you have a 470 ohm SMD resistor just solder it between pins 4 & 5 and you are done. For me a 5k multi turn potentiometer from the junk box was used: 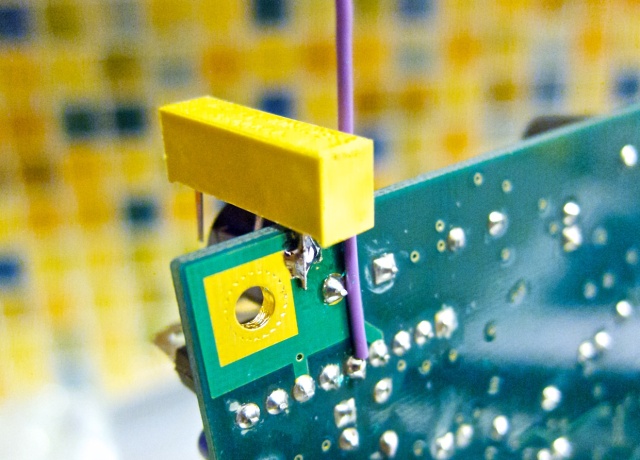 One end of the pot connects to analog ground and the wiper connects to a purple wire soldered to pin 5. (This enabled me to do actual voltage measurements on pin 5 with the board in place. You don’t have to.)

Finally a glue gun fastened the pot so it won’t wiggle and drop off. 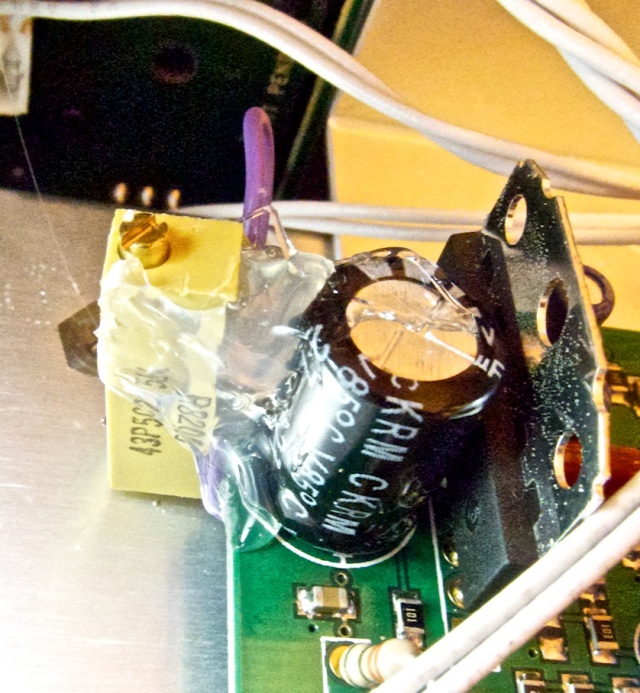 Modification and board in place. Done.

Remember to take care when putting the board back. Check and double check that the two rows of headers really join between the upper and lower boards in the rig. The corner holes of the printed circuit board should exactly match the screw mounts. If not, the boards are not connected at all or, probably worse, connected off by one! Use a lamp and magnifying glass to double check before hitting the power button! (The Jupiter is too light to end as a boat anchor which is probably its only purpose if the connectors are wrong…)

After the mod I clearly hear when the threshold level of 0.4V is reached. The receiver is dead silent. Then just a nod at the AF Multi knob and the audio goes on again. The maximum level is unbearably loud as ever either with the speaker or headphones. Around 25% audio level is normal. So, yes, the mod is successful.

Note. The previously mentioned R37 4k7 is factory not-installed on my board as can be seen in the, admittedly rather fuzzy, picture below:

This is an enlargement of the board overview picture. For navigation: Top left is the capacitor the pot was glue gunned to. In the middle there are two solder blobs with apparently nothing in between. This is the place for R37 had it been there. If your board has a resistor in this position then you can safely remove it.

Disclaimer: I am of course not responsible for what you do or what you end up with. If you are not comfortable with the instructions then do not modify your rig.

Tip 1: Get a glue gun! You will have endless fun and practical use of it! Really! Get one!

Tip 2: Get a headlamp! Having your hands free and still be able to get light exactly where you want it is a revelation. I wonder how I managed before getting it? Mine is an Armytek Wizard (http://www.armytek.com/products/flashlights/headlamps/) and it illuminates like crazy (if you want to. It also has other levels of light from “is it broken or what?” to “sh*t, that was a strong beam” and the extra setting “weld!”:)

This entry was posted in Uncategorized and tagged audio, jupiter 538, mods. Bookmark the permalink.