Over the years I have grown quite fond of vertical antennas. They have several nice properties not least the small estate required and the low take-off angle which makes them useful for DX.

The bare vertical antenna (e.g. a quarter wave stick) is omnidirectional but there are ways of attaching both reflectors and directors to it if needed to get some extra gain and directivity. Note that gain and directivity are not always wanted. High gain is usually achieved by concentrating the radiated power into a specific direction. Higher gain gives an antenna that reaches longer but the directivity also reduces the antennas usefulness in other directions.

So while gain can be considered to be a good thing, the ensuing directivity may not always be so. This leads to the interesting insight that a bidirectional antenna can actually be of much better use than a high gain, high directivity one! The bidirectional will cover more area at the cost of a few decibels lower overall gain.

I thought I had tested enough variants of verticals by now. That I had gained a thorough grasp on their patterns and had a “palette” of different one to pick one that would suit every need. In fact, perhaps I have. But the vertical constructed and described by G0GSF in the RSGB Antenna Collection, seemed a very interesting antenna indeed. I will here call it the GSF-beam for simplicity.

While G0GSF made some pioneering work on the physical dimensions of the driven and reflector elements of this beam, the end result actually belongs to a wider group of antennas that stem from the work of Fred Caton, VK2ABQ, Les Moxon, G6XN, and others. The antenna type is a two element beam with tightly coupled elements. Fred Caton first came up with this antenna type, Les Moxon popularised it in articles in the 70’s and later in his book Antennas for All Locations, and finally L.E. Cebik determined, through extensive computer simulations, dimensions for it that made 50-ohm feed possible. I think it was Cebik who coined the name Moxon-antenna.

G0GSF made computer simulations as described in the article mentioned to determine the effect of loading the driven element with wires. He then used two identically loaded elements for reflector and for driven element. The end result is in principal a vertical moxon with loaded elements. The benefit of this is a much smaller antenna (at least not as high) than a standard moxon. And one of the standard moxon’s big virtues is its small size in the first place.

My own computer simulations show that G0GSF’s dimensions are as general today as they were in 1982, but also that some pruning of the elements, not mentioned in the article, with the antenna in place can make the antenna characteristics optimal. A side-effect is also that G0GSF’s original feed system can be eliminated, a 1:1 SWR is quite achievable with no deteriorating effects on the radiating pattern.

Before going in on the pruning of the elements here are some numbers that we aim to achieve (the antennas lowest point is assumed to be about 1/8 wavelength above ground level, 14050 kHz as per MMANA antenna simulator): 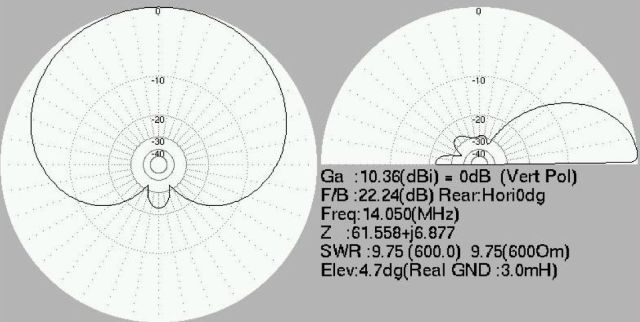 The GSF beam above normal soil and saltwater. A height of 3 metres and a frequency of 14.05 MHz is used. These diagrams show the antenna after final pruning of the lengths. A lower SWR is obtainable if called for. Note that the SWR figures are calculated for a feeder impedance of 600 ohms. With 50 ohm feeder this translates to a SWR of about 1.5. Note the effect of the conductive ground: an extra gain of more than 6 dB, that’s quadrupling the output power!

And… this is how to build one:

Start off with the dimensions by G0GSF. These are translated into wavelengths in the picture below. Whether you use insulated wire or not is practically irrelevant in this stage, the pruning will take care of that. Just cut the lengths according to the picture.

Initial dimensions for the GSF-beam as modelled by MMANA. Scale according to your preferred frequency, as dimensions are expressed in wavelengths. For 20 meters the wire lengths are 0.187 wl = 4 m, 0.234 wl = 5 m. Trim in place to get best radiation pattern. Later simulations show that a length of 0.23 wl gives a better match to 50 ohm after final pruning. It is really not that fuzzy! (Actual measurements on existing beam for 20 m and best F/B are for reflector: upper 1.90+1.95=3.85 m and lower 1.90+0.73=2.63 m. The “1.90” are for the inward lengths, the lower trimmed leg is a mere 73 cm. This is contrary to simulations where the lower leg was longer!)

The antenna in its current form will have approximately the gain in the table above but the F/B-ratio is not optimal. Perhaps it is good enough already, that is up to you but with a simple device it can be significantly higher.

Put a small beacon of a couple of milliwatts in the beam’s backward direction. Make sure it is quite far away, a distance of some 10-20 wavelengths is sufficient.

Now while listening to the beacon, cut off pieces of the lower, outer horizontal wire of the reflector element, while listening to the signal. When the signal starts to deteriorate, cut in smaller increments (a centimetre or two at a time is ok). Make sure not to touch the antenna or even be in the vicinity of the antenna by a couple of meters when determining the signal strength. Your body will otherwise couple capacitively to the element and change its resonant frequency.

You will notice a distinct minimum of the received signal after a while. It might be necessary to put a larger antenna on the beacon or increase it’s output power in order to be able to read the signal when maximum F/B is achieved. Don’t forget to salvage the beacon when done!

When maximum F/B is thus accomplished, there remains to minimise the SWR. The easiest way to do this is to simply connect your transmitter and a SWR bridge and make reading off the SWR bridge while outputting as few watts as is required to get a reliable reading. Ideally the feeder between the transmitter and antenna is a half electrical wavelength (or any multiples of this) piece of coax, in which way your readings will be identical to the SWR at the antenna proper. However as long as the SWR is at its lowest at the transmitter all is well. (The antenna is not far off resonance in the first place, so the possible mismatch between the antenna and the coax is likely to be low anyway).

Cut the lower end of the outer wire of the driven element for this final adjustment. Settle for a SWR of 1.5 or less. This final pruning does not have any perceivable influence on the F/B-ratio. Feel free to check it just to make sure.

And, voila, you are now the proud owner of a useful low-angle, small size, DX-antenna!

2 Responses to The G0GSF Beam